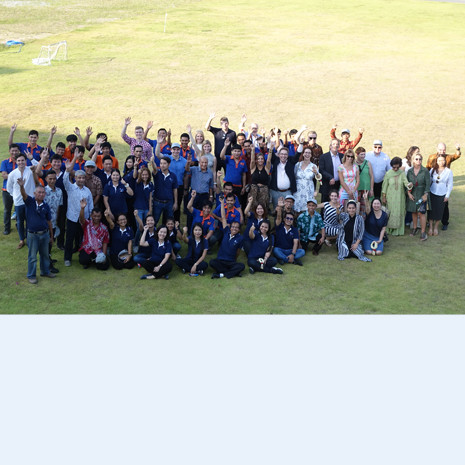 The inauguration of the new plant in Tambon Takiantia, near Chonburi, Thailand, demonstrates in impressive style how at Paul & Co economic success and interpersonal cooperation go hand in hand. The leading films and foils manufacturers of Southeast Asia have been relying for years on our just-in-time production of brand-name paper cores and angular edge protectors. This German/Thai joint venture promises to keep growing, and the focus will always stay on mutual respect and working with the strengths of both cultures.

Right from the start, solid sales figures and steadily increasing production volumes made for sunny prospects in Thailand. It became clear as early as 2016 that the rented space was becoming too small to accommodate all the necessary technology and warehousing in addition to 70 employees. The most efficient solution was to construct a new, 8,800 square meter (approx. 95,000 square foot) plant. So in just 22 months, the company built the Kunert Group's most modern manufacturing plant in Tambon Takiantia, Thailand. Besides the facilities for current production the new plant also accommodates a new production line for paper cores as well as state-of-the-art drying rooms. Working conditions in the new plant are top of the line, with comfortable social spaces for the employees. But for the market's purposes, the greatest selling point – even outside of certain specialised customer circles – is likely the fact that Paul & Co Asia is the continent's only paper core producer with certifications for environmental friendliness, quality, hygiene and food safety.

Continued success, new location
The transition from the old premises to the new plant took place while production kept running. This impressive achievement on the part of everyone involved drew high praise from Manfred Kunert, Managing Director of Paul & Co: "Great work is being done here in Asia. Our customers can rely on our products to be ready – just in time and made to measure. The company is proud of directors Khuned Sachdev and Marco Schumm and their team whose good coordination and smooth cooperation permits us a glimpse of the future. No doubt about it: We're as ready as can be for whatever the market demands. And we're glad to continue down this road together with friends and keep learning from each other!"

Uninterrupted growth since 1998
In fact, this is just the latest headline in a much longer track record of impressive development. The Kunert Group from Germany took its first steps into the Asian market much earlier. It was twenty years ago that, due to healthy export figures of German paper cores to Southeast Asia, the decision was made to establish a production facility in the region. This was the beginning of a new chapter in the family's history. It was 1997 when Paul & Co Asia, then known as Pt. Paul Buana Indonesia, was founded as a joint venture with a family of entrepreneurs from Thailand named Sachdev. By now both families are connected by long years of close friendship and a deep trust founded on having values, experiences and a vision in common. A combination of economic and technical expertise, regional commitment, and cooperative financial investment had the first manufacturing plant commence production in Indonesia in 1998. Despite difficult political and economic circumstances owing to a financial crisis and the overthrow of the Indonesian government, the company, which was based in Jakarta, started making a profit in its first year of business already. Strong demand in the neighbouring countries and export rates of about 40 percent prompted the decision to establish a second plant. Thus Paul & Co Asia started producing paper core products and angular edge protectors of identical quality in Thailand in 2010.

"We make the world colourful!"
This is Manfred Kunert's enthusiastic way of emphasising the importance – both to him and to Vinai Sachdev, head of the Sachdev family – of the social and interpersonal component of this collaboration, from the beginning to the present. "Paul & Co has grown more than just economically through the exciting developments in Asia. Our patchwork family business brings together all manner of different cultures, religions and nationalities to work together to overcome any challenge." In any community as colourful as this, it follows that respect for the cultures and customs of others is essential. That is one reason why the company celebrated the inauguration according to Asian traditions including blessings from Buddhist monks and unforgettable entertainment provided by artists and performers. To strengthen regional ties, employees from the Indonesian branch were invited to come celebrate too. The Kunert family of entrepreneurs had already come to recognise – through its cooperation with the Beillards in France and the family-led Nippon Paper Core company in Japan – that family companies especially value and appreciate the human touch. "A family company thinks in terms of economic growth, too – but due to its focus on sustainable, lasting growth it has a different way of coming to decisions. The goal isn't ‘bigger, faster, more’. Instead, the question is always how best to prepare for the future," explained Managing Director Kunert. That is why it is important to both families that this way of thinking is carried on in the company in the future. Thus the next generation is already included in every decision-making process, and the youngest generation of Kunerts is beginning to take on its first tasks in the company. They are all united by having completely internalised communal cooperation as a way of life, as a way of growing together.

Quality and cooperation
Reliability, customer service, and top-notch quality: These are the virtues that Southeast Asia's leading films and foils producers appreciate – and that have made them loyal, long-standing customers of the joint venture. The loyalty of staff also conveys a clear message. Some of the two branches' 170 employees have been with the company for twenty years. This means that customers can rely on long-term relations with well-known contact persons and experienced sales partners, allowing them to build up a unique measure of trust. Technology and expertise interlock perfectly with research and development, thus enabling the company to fulfil every need of customers in Asia as well as to enter new markets.

About Paul & Co Asia
Founded in 1997 as a joint venture between two families of entrepreneurs, Kunert from Germany and Sachdev from Thailand, Paul & Co Asia has become a byword for reliability and enduring customer relations. Its two production plants, one in Jakarta and one south of Bangkok, manufacture paper cores for producers of high-quality foils and films and flexible packaging and for paper mills, as well as angular edge protectors.